Things have been moving on well.  I'm trying to catch up with the posting now as I'm a little behind.
I was struggling to find suppliers in Aberdeen that had the faintest idea of what I was talking about when I was looking for specialist firebricks.  I was waiting fro them to get back to me but NONE ever did.  Firebricks are pretty expensive when you need to buy them new and you you need about 250+ to build your oven.  After a lot of time looking I opted to buy a kit from a company in Bristol that would ship to Aberdeen. I have used some of their products in the past for my wood burner set up so I know they are a good brand. So I got out my Tesco credit card and gave it both barrels.  Vitcas do oven kits that come prefabricated, which is not what I'm after but they do do a 'Build your own Pizza oven kit". Which ticked a lot of boxes for me.   The prices were not too bad either I found.
I did but some other 'accessories' from them but none were suitable for my set up so I later returned them.   The Oven kit is pretty basic and I'm not convinced they have everything you need in their kit but I may be proved wrong. My returns are not included in the totals I post. I'll gloss over things as I go....

Vitcas Build your own Pizza oven Kit - £1011.40
Delivery to Aberdeen (Scottish Highlands charge for all Scotland) £103.50
If you live in England it was only £53.  Please don't get me started on delivery rates.
I sucked up my pride and took it like a man. It was 2 pallets from Bristol so it seemed reasonable, it's just the 'getting shafted' experience that is often added to a Scots persons internet shopping experience.
For the record - Aberdeen is not "Scottish Highlands" and it's not classed as "offshore"
We are a major mainland UK port and 1/3 of UK GDP comes through our city.
Our Harbour is the oldest existing business in the UK.

Any way the Vitcas kit included the following.

I bought a flue and dampner and straight flue pipe and also a ratehr nice oven door with glass and thermometer. Unfortunately - None of these were suitable for an oven the size of their kit so I had to return them. 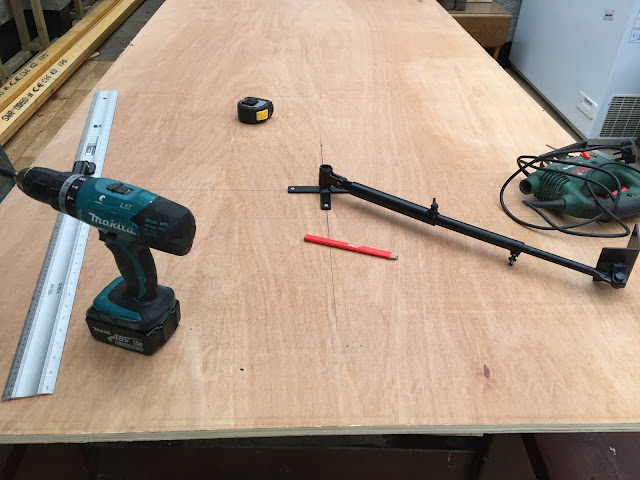 I draw a template for the floor of the oven which becomes essential for the next few moves. 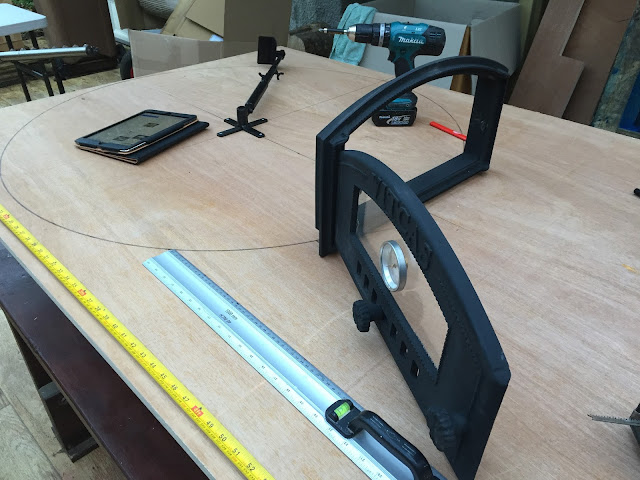 Here is the Vitcas Door laid out on the template. It's a nice door but has 2 problems.  Firstly it's too small for an oven with an internal diameter of 108cm and it's too low an opening.  The design of the door also means that any Pizza Peel I use will catch on the door fitting.  Sadly it has to go. 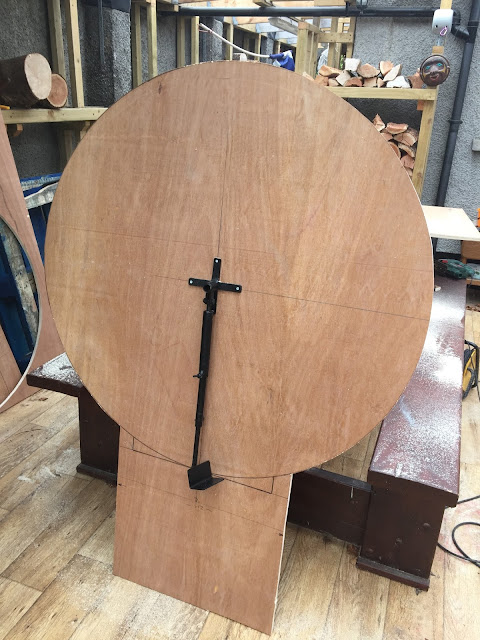 The finished template ready to be used. Fitted with my wonderful 'free' Trammel from Vitcas.  It was very handy for drawing the perfect circle for the oven floor template. 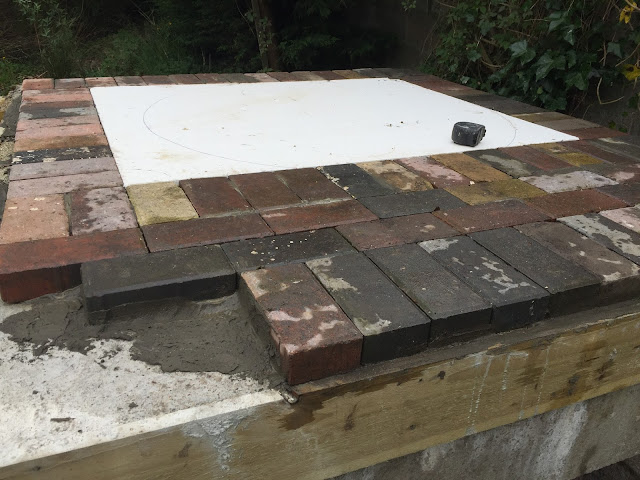 Here you might wonder what's going on....    The Vitcas Kit came with a Ceramic Fibre board that I hadn't planned on having. I had already set the Vermiculite concrete insulation already.   I decided I would use this board as well now that I had it.  Otherwise it would be in my garage, getting in the way for years. Plus it would give me a level surface, better than my concrete layer.
Trouble was it wasn't quite big enough for the 1 meter oven Vitcas say, so I had to make up a level with some old lock block to support the walls of the oven.  I am concerned they become a water trap later but will work a way round that. 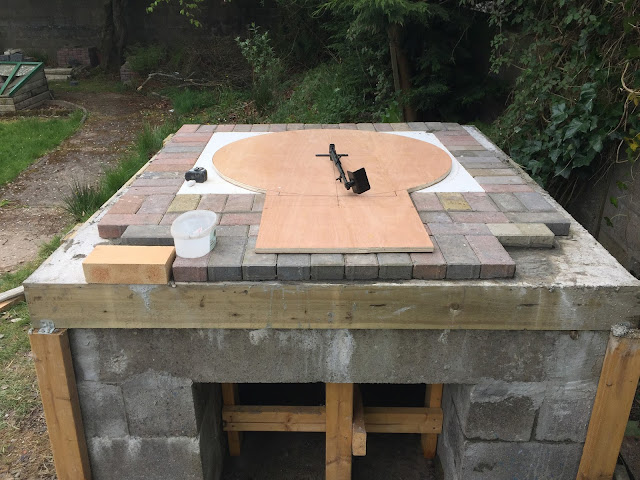 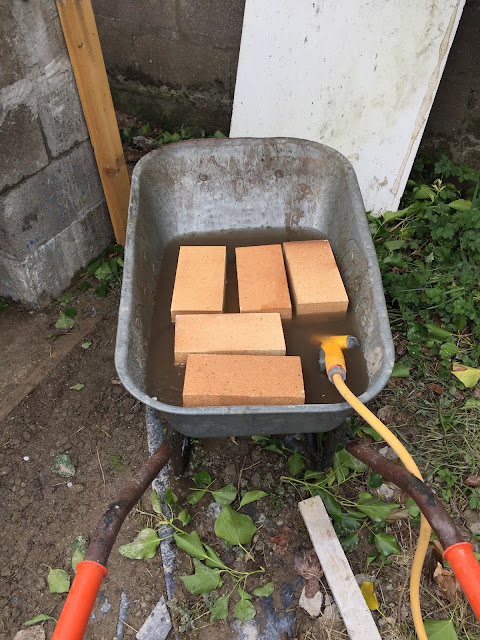 You must soak firebricks before laying.  These ones bubbled like crazy and made the water warm. 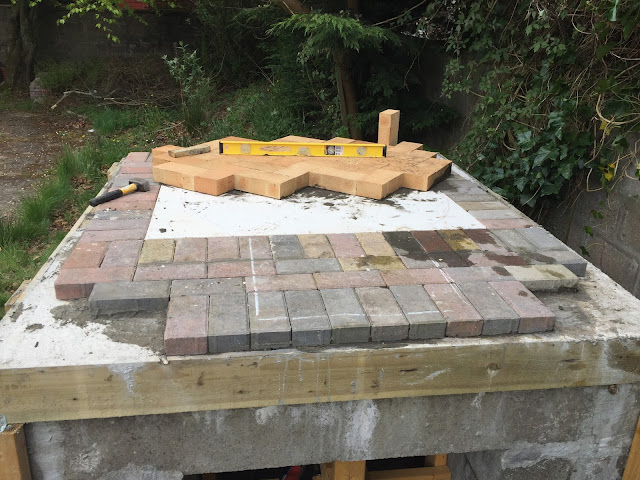 I did this in stages as I was pressed for time. I had to go to a funeral.  This would be better done in one go so you can get a better level than i did with the blocks. 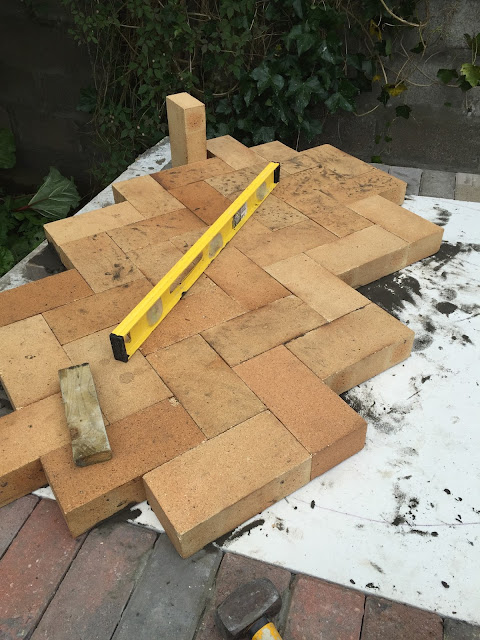 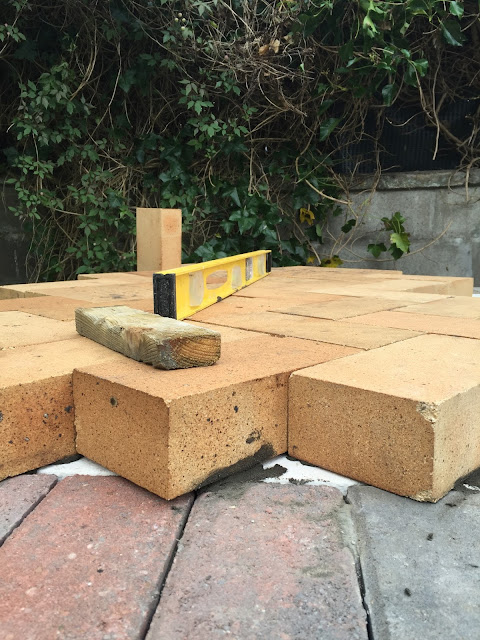 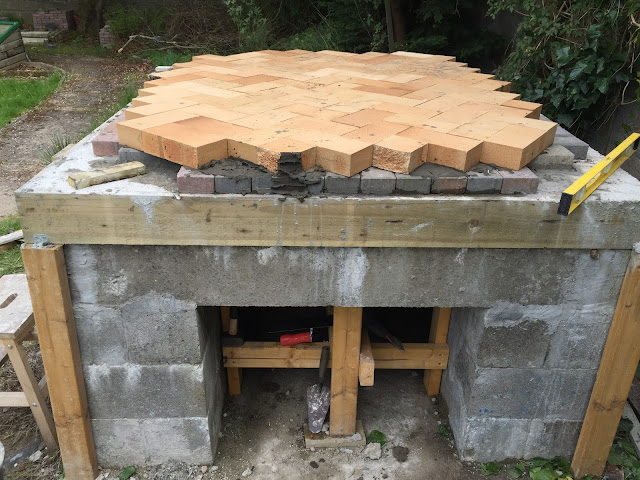 I just leave it as is to to dry.  I don't think rain will be a problem on these materials, it would even be a good thing I believe. It help the curing process if there is moisture.
Posted by Unknown at 15:48